NOTE TO VISITORS: After beginning to compile archival materials here several years ago, my research - and the materials I turned up - got totally out of control. At that point, it became unclear where I was headed and what I should do with my expanding trove and increasingly granular knowledge of the asylum/hospital and its history. I haven't answered that question yet, so this site has not expanded. Nonetheless, it remains the single most extensive collection of high quality historical photographs of the hospital on the web, and I hope you find what you are looking for.

This website is a collection of photographs of the main campus of The Michigan Asylum for the Insane, located in Kalamazoo, opened in 1859.

(This site does not address the farm complex on Asylum Lake or the outlying building further north, across town.)

The photographs (and maps and satellite images) posted here document the buildings and grounds of a major U.S. asylum that never closed and never fell into ruin, but instead steadily shrank.

One result of this slow erasure is that the Michigan Asylum for the Insane in Kalamazoo is poorly documented on the Web. I grew up a block away from the place and knew it well. This site is my attempt to gather up the pieces and put them together again.

(The original hospital building (later known as the Female Department) was demolished in 1968, and more major demolitions followed in the mid-1970s and late-1980s. Additional old buildings were picked off between then and 2013.)

I am steadily adding images, including high-resolution scans I have made of photographs in archival collections. As long as my interest holds, I will attempt to gather, consolidate, and orient all relevant images of the Oakland Drive asylum on this site.

This site is dedicated to William A. Decker, M.D., whose book is the only thorough history of the Kalamazoo asylum. It is also a primer on the history of progressive mental health care and the building designs and community structures that followed from it. I recommend it: Asylum for the Insane – A History of the Kalamazoo State Hospital. I offer up the site as a visual aid – a guided tour of the grounds – to accompany Dr. Decker’s history.

Do you have photographs?

I am particularly interested in photographs of the buildings and grounds from the mid-to-late 20th Century. If you have any, or know of an archive that does (other than Western Michigan University and the Kalamazoo Public Library), please get in touch. 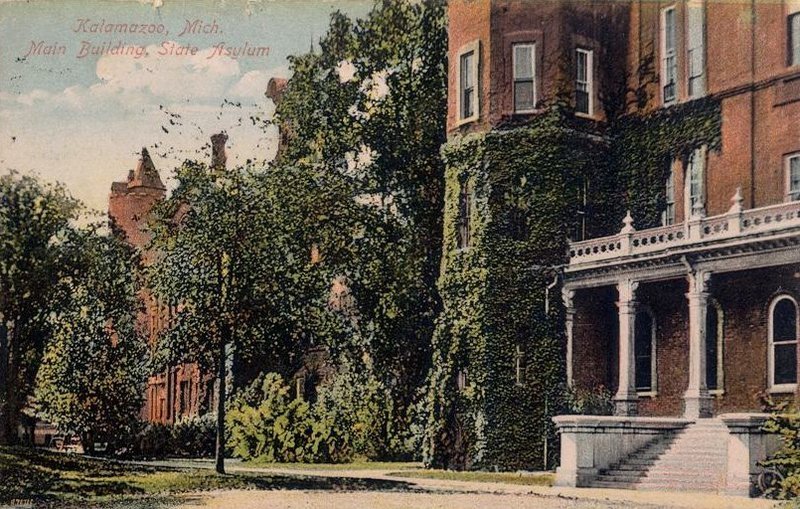